If you were presented with 100 days to work with, what would you try to accomplish? Train for a marathon? Cook your way through Julia Child’s The Art of French Cooking: Volume 1? Maybe it’s finally watching all five seasons of Breaking Bad on Netflix.

Historically, 100 days is a duration used to measure initial accomplishments of a new U.S. president, and the Donald Trump administration is no exception. 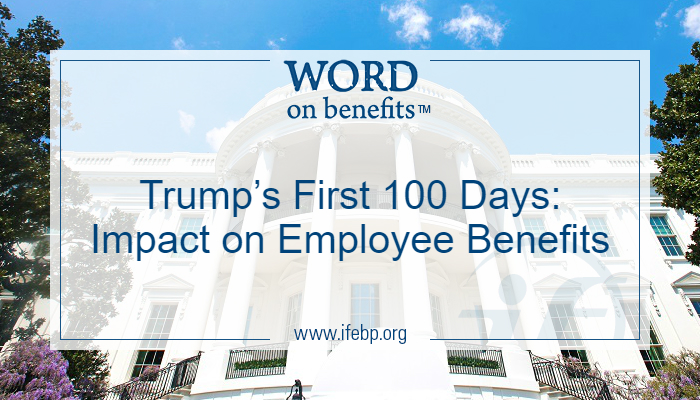 Diana Bardes, attorney at Mooney, Green, Saindon, Murphy & Welch in Washington, D.C., summarized happenings from Trump’s first 100 days that impact the employee benefits landscape. Tune in to her webcast, A 100-Day Look Back: Labor and Employment Law, for a full account and future predictions.

Bardes broke down several issues in her webcast that I have abbreviated below for the busy reader:

First up to bat is the Affordable Care Act (ACA). In March, Republicans took their first swing (it’s baseball season—I can’t help sprinkling in analogies from America’s favorite pastime) at repealing ACA and replacing it with the American Health Care Act (AHCA). The House passed the AHCA bill on May 4 but it’s not a done deal—the bill will now go to the Senate, where changes would be made before anything officially goes through, as Bardes explained.

The Trump administration has four plays in mind if the new bill doesn’t pass through the Senate, including eliminating benefit subsidies, not enforcing the individual mandate, providing narrower definitions of essential health benefits and adding market stabilization rules.

Let’s review the rules—DOL Rules that is. A couple of big rules that union and labor activists have been pushing for a while are the Fiduciary, Persuader and Overtime rules. The appointment of Alexander Acosta as new DOL Secretary is a game changer. Once he settles in and starts developing policy, the current DOL position on all three rules is likely to change.

Tax Reform is stealing third with Treasury Secretary Steven Mnuchin’s confidence that the administration will move to complete its overhaul of the tax system even if health-care plans stall. Mnuchin has stated the economic growth that would result from the proposed tax cuts would be so extreme—close to $2 trillion over ten years—that it would “pay for itself.” The tax reform plan will go to the House Ways and Means Committee for debate. Once there’s a bill, we’ll have a better idea of what future tax reform efforts are going to look like.

Retirement Policy Changes are in play as the Senate is expected to approve a resolution ending a DOL rule that gives guidance to states regarding state-run retirement programs for workers at small businesses that don’t offer retirement plans. The House had passed a resolution overturning the rule; the Senate considered it on May 3 and it passed, repealing the rule. States are planning to move forward in encouraging retirement saving.

We’ve heard talk of Paid Leave, but nothing official has happened yet over Trump’s first 100 days. Forty million Americans and counting don’t have paid sick leave, and over two-thirds of them are at the bottom 25% of the pay scale. As more states adopt their own sick leave policies, we’re likely to see more information on the topic.

Bardes concluded that President Trump hasn’t achieved as much in his first 100 days as he set out to. What we’re noticing with this administration is that it’s not all “politics as usual.” Things are moving quite quickly, and we’ll continue to experience that momentum.

Tune into the full webcast for more.