Is paid parental leave in the U.S. at a tipping point?

It does seem that paid leave is having a moment. Companies across the country are regularly making headlines for expanding their paid leave options, often including options for both moms and dads. How will a new administration impact the trend? 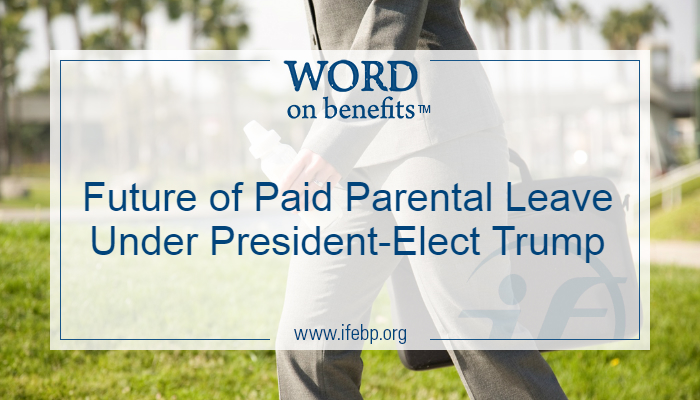 Leading the pack for offering paid parental leave are companies like Netflix, which offers unlimited maternity and paternity leave for new parents during the first year of a child’s birth or adoption, and Etsy, which allows 26 weeks of paid leave over two years for new moms and dads.

Donald Trump has said that he intends to provide six weeks of paid leave to new mothers before they return to work. From donaldjtrump.com:

PROPOSAL: The Trump plan will guarantee six weeks of paid maternity leave by amending the existing unemployment insurance (UI) that companies are required to carry. The benefit would apply only when employers don’t offer paid maternity leave and would be paid for by offsetting reductions in the program so that taxes are not raised. This enhancement will triple the average paid leave received by new mothers.

President-Elect Trump also points out key issues to support his vision including:

A report released just before the presidential election found that just over half of organizations, 54%, support mandated paid family leave.

Currently the United States lags behind our peers in offering paid parental leave. There are 193 countries in the United Nations and 185 of them offer paid maternity leave.

Among the eight countries who don’t offer paid leave for new mothers, the United States is the only high-income country without leave. This at-a-glance map from the World Policy Center puts the global stance on maternity leave into perspective.

So are we at a tipping point? Guess only time will tell.