Possible ACA Repeal? Then What?

The November 8th elections were defined by widespread Republican victories. In addition to winning the White House, the GOP has control over the House of Representatives (238-194) and Senate (51-48). In light of the news, analysts are revisiting President-Elect Trump’s campaign positions on health care legislation. Trump has clearly articulated that repealing the Affordable Care Act (ACA) would be a top priority of his administration. More recently, GOP representatives showed some support for existing provisions of the Act, including coverage requirements for patients with preexisting conditions and coverage for children up to the age of 26. While ACA repeal-and-replace efforts are surely underway, insurers, employers and consumers are waiting in limbo for changes to a law that has been in place since 2010.

In anticipation of the November elections, the Foundation’s survey 2016 Employer-Sponsored Health Care: ACA’s Impact asked single-employer respondents a number of questions addressing the actions they may take if the law is repealed. 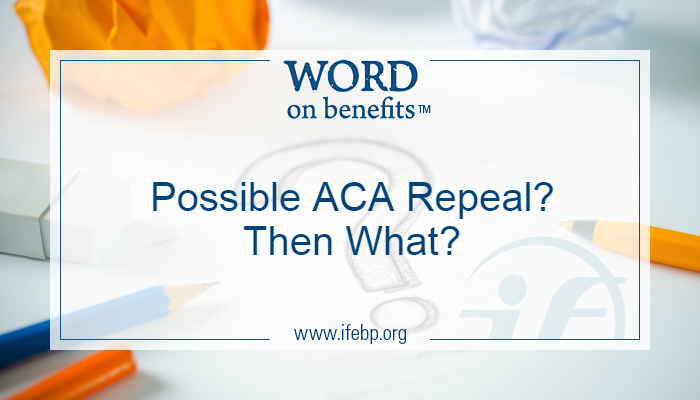 [Related: A Blueprint for Completing 1095-C Reporting To Make a “Good-Faith Effort”]

Responding employers were asked which existing ACA provisions their organizations would want to keep if new legislation were introduced. The most popular provision for employers is the elimination of preexisting conditions exclusions, cited by 37.7% of respondents. Employers also support keeping:

Only one in nine (11.2%) responding organizations would not want to keep any of the listed ACA provisions.

[Related: Inside the New Administration & Congress: What’s Next?]

Only one in 12 (8.3%) responding organizations stated that their employees would not want to keep any of the listed ACA provisions.

During this time of uncertainty, one thing we can count on is that 2017 will be an interesting year for ACA! The International Foundation will continue to keep you on top of all the latest developments as they happen.