There’s been a lot of talk about the Affordable Care Act (ACA) case King v. Burwell here at the International Foundation headquarters—When will the Supreme Court issue a ruling, what impact will it have on the benefits industry, what twists and turns might this take? My Twitter feed is loaded with news stories, speculation, analysis . . . but what I really wanted is a summary, so I went to our Director of Research Julie Stich and Director of Information Services Kelli Kolsrud to hear them explain the case. Here is their conversation . . . after you’ve read, please share your thoughts in the King v. Burwell quick poll at the end! 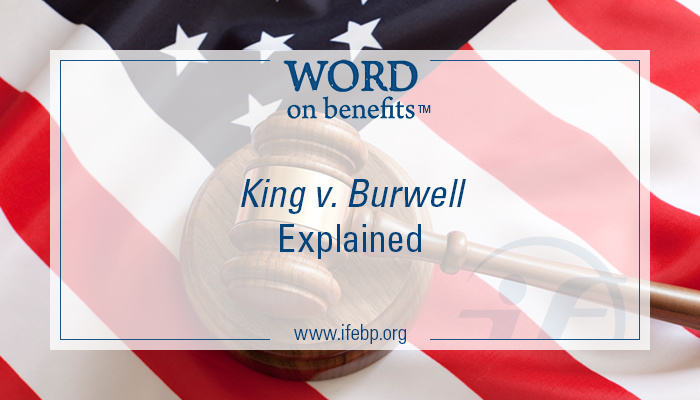 Kelli: It’s an interesting topic. Let’s start by outlining what the case is about. Basically, you could say it’s all about tax credits, also known as subsidies . . .

Julie: (interrupting) Or, you could say it’s about four words.

Kelli: Yes, it’s about four words related to subsidies! The four words are “established by the state.” They sound harmless enough. But we both know that phrase is the bone of contention. The Affordable Care Act (ACA) originally intended that each state would set up its own health insurance exchange (also called a health insurance marketplace), but fewer than half of the states actually set one up by the deadline. Most states used the fallback option, which was to offer their citizens access to the federally run health insurance exchange. King is claiming that people who get coverage through a federally run exchange shouldn’t get subsidies. This is because the law says subsidies are available to individuals who are enrolled in an exchange “established by the state.” The other side, Burwell, representing the federal government (a.k.a. the Obama administration), says the law intended the subsidies to be available in all the states.

Julie: And the District of Columbia.

Kelli: Yes, of course. OK, let’s say they rule for King. Then what happens?

Julie: It could be one big mess. If people lose access to the subsidies, most won’t be able to afford health insurance through the exchanges and they’ll drop their coverage. Experts are predicting 7.5 million people could become uninsured.

Kelli: That’s a lot of people.

Julie: Plus, those who manage to keep coverage will likely be those who are sick and need more care, leading to higher claims costs. That will result in higher insurance premium rates, making coverage even more unaffordable.

Kelli: Yes, you need healthy people to buy coverage too, to spread the risk. Many are predicting the exchanges would collapse entirely.

Julie: How is this going to affect the individual mandate? Won’t more people be subject to the penalty if they’re not buying coverage through the exchanges?

Kelli: That seems logical but actually, without the subsidies, I think more individuals would qualify for hardship and income-related exemptions to the individual mandate because the cost of coverage would be so high. Of course, International Foundation members will see more direct impact because of how the employer mandate will be affected.

Julie: One part of the employer mandate requires large employers to offer coverage to almost all of their full-time employees. The penalty for not offering coverage is triggered when any employee buys coverage through the exchange and gets a subsidy.

Kelli: And that penalty is substantial. If even one employee gets a subsidy, the employer must pay $2,000 per full-time employee (minus the first 30 employees). So if the Supreme Court rules in favor of King and disallows subsidies for people in states with federally run exchanges, the employer mandate penalties will never be triggered. I wonder if employers in those states would be exempt from some of the Form 1094 and 1095 reporting?

Julie: Good question. Of course, in the states with their own exchanges, the employer mandate penalties could still be triggered because subsidies will be available there.

Kelli: That’s definitely a mess, especially for employers with employees in multiple states. Do you really think it will come to that?

Julie: Hard to know for sure. Supreme Court decisions are known for being top-secret until announced. In the oral arguments in March, Justice Alito hinted that even if they ruled for King, the Court would have the option to delay the effective date of the decision so that subsidies wouldn’t disappear immediately in the affected states.

Kelli: If the Court rules in favor of King, members of Congress on both sides of the aisle are floating various proposals to deal with the ramifications. I would guess that Democrats would introduce a bill to remove the “four words” or at least clarify that subsidies were intended for all the states. Of course, such a bill wouldn’t be passed in the current Congress.

Julie: Some Republicans have said they’d be willing to pass legislation to continue the subsidies until the presidential election in 2016 if the Democrats will agree to repeal the employer and individual mandates.

Kelli: Yes, I’ve read about several different proposals. The big question: Would any of these proposals actually pass both houses of Congress and get signed by the president?

Julie: On the flip side, what happens if the Supreme Court rules against King, in favor of the government?

Kelli: That answer is certainly simpler. The exchanges and subsidies would continue as they are now. Employers can then turn their attention back to the variety of complicated ACA requirements, such as reporting on Forms 1094 and 1095 and the Cadillac tax.

Julie: Ah, the fun in benefits never ends. So when will the suspense end?

Kelli: The justices will let us know at the end of June. Stay tuned!

Share your thoughts on King v. Burwell in a quick poll: