We like to think that everyone loves our spouses, but in truth, there are an increasing number of employers who would like to rid themselves of employees’ better halves . . . No, there’s no conspiracy to physically off our loved ones (this isn’t The Sopranos), but in an effort to control health care costs, more and more employers are implementing different versions of what is commonly referred to as “spousal carve-outs.” In other words, employers are removing our spouses from their health care plans in order to keep their plans financially viable. 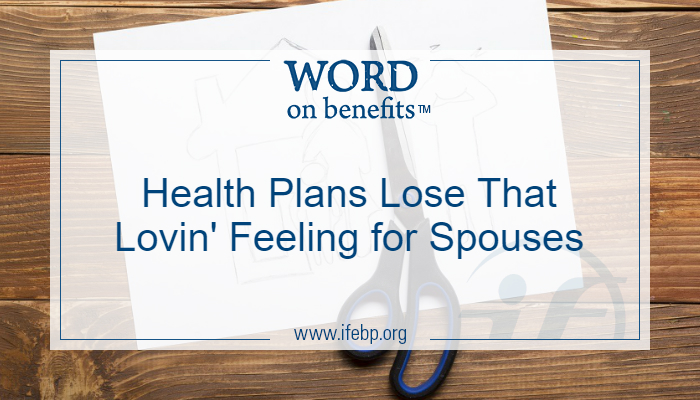 While spousal carve-outs have existed for years, the Affordable Care Act (ACA) surprisingly helped increase their prevalence. This is due to a variety of reasons, including the fact that ACA expanded coverage for individuals and families across the country, while simultaneously causing some employers’ health care costs to rise. In an effort to contain these new costs, employers turned to different cost-cutting methods that included spousal carve-outs, since it was one of the few areas of health care coverage that  ACA left untouched.

According to one in-depth study published in 2014, the average spouse costs up to $1,179 more than the actual policyholder on a health plan, which may help to explain why some employers see spousal carve-outs as a good way to limit expenses. The International Foundation Employee Benefits Survey shows 23% of surveyed corporations have implemented some type of spousal surcharge or carveout. But not all spousal carve-outs are created equal, and there are generally four different versions typically implemented.

The Surcharge
Many employers do not want to directly cut off coverage to their employees’ spouses but still want to offset the costs associated with having the spouse on their health plan. As a result, they typically implement something called a “spousal surcharge”. Under this method, in order for spouses to receive health care coverage, employees are required to pay a surcharge to help contribute to the cost that this additional spousal coverage bears on the plan. Employers like Xerox, which back in 2014 started requiring its employees to pay a $1,500 surcharge per year in order to cover their spouse on their health, look to this surcharge as a way to continue to provide benefits to employees and their spouses, while also handling the increased costs associated with this coverage.

The Limited Surcharge
In an effort to balance the competing interests of employer costs and spousal coverage, some employers may look to apply a surcharge on spouses in limited circumstances. In a limited surcharge policy, the surcharge only applies when a spouse is offered coverage through his or her own employer but still opts to receive spousal coverage. Under this type of policy, the employees are not penalized when their spouse lacks their own coverage, but the employer still provides incentives for spouses to receive their own coverage if it is offered to them.

Limited Spousal Coverage
Other employers do not even bother with surcharges and instead go right to the heart of the matter by limiting a spouse’s health coverage. United Parcel Service (U.P.S.) made waves back in 2013 when it publicly announced that any employees’ spouses who could obtain coverage through their own employers would no longer be covered under its health plan. The decision affected close to 15,000 spouses, but U.P.S. stated that these limitations were necessary in order to maintain the cost of its health plan.

No Spousal Coverage
Finally, some employers simply cut spousal coverage altogether. According to Mercer, one in ten large employers completely excludes spouses from receiving health care. While being the harshest of the spousal carve-outs, it is also the most likely option to provide financial savings to employers’ health plans.

Whether an employer has decided to implement a surcharge or whether they have limited coverage, as long as there is no mandatory requirement to provide spouses health coverage, employers will continue to look at spousal carve-outs as an option to help maintain the financial stability of their health plan.