Three panelists offered their views during a recent International Foundation of Employee Benefit Plans webcast, “Post-Election Pensions and Benefits Outlook: What to Expect.”

Panelists said Justin Trudeau, prime minister-designate, and the new majority party will move forward on many campaign promises, including enhancement of the Canadian Pension Plan (CPP). But questions remain on implementation details. Here’s how panelists predicted a proposal to expand the CPP would unfold and the impact on plan sponsors. 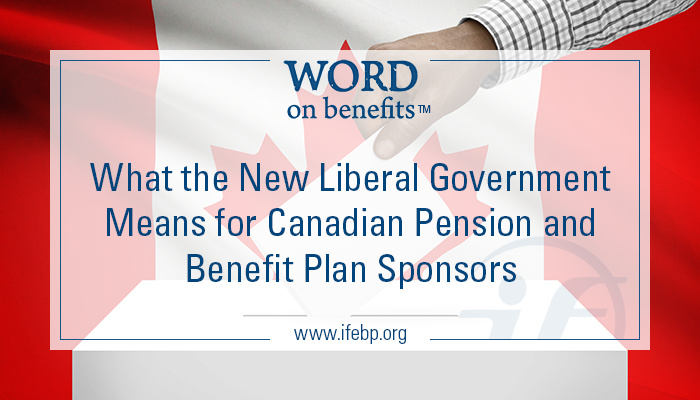 The Liberals said that within three months of forming the government they would begin discussions with the provinces, territories and other affected groups on enhancing the CPP and that they would work with Quebec for any parallel enhancement of the Quebec Pension Plan (QPP), said Jonathan Rhys Kesselman, professor at the School of Public Policy at Simon Fraser University.

One question is whether Ontario will immediately abandon its Ontario Retirement Pension Plan or put it on hold while waiting to see how the federal effort plays out. “I would assume the (Ontario) government is going to at least postpone the ORPP process,” said Jim Stanford, Unifor economist. “I think CPP expansion is in the cards, although there is going to be a lot of discussion and dialogue about the precise design of the expansion.”

Joe Nunes, president of Actuarial Solutions Inc., said the Ontario government may “keep plowing ahead as sort of a backstop, if they can’t get the expanded CPP.”

It’s also unclear what form a CPP enhancement would take and whether it would be modest or substantial, Nunes said. “Employers are certainly going to have to take that obvious step of saying, ‘What’s our total basket of compensation? What are we trying to accomplish?’ ” he said. If they’re being asked to contribute more dollars to an enhanced CPP, they’ll likely have to take that money from somewhere else, he said.

“I think the Liberals will proceed, most of the provinces are likely on board for significant enhancement,” Kesselman said. “And the real question that I see to be resolved is: Will they allow an opting out by employers that already provide generous adequate workplace pensions or will they fold them into the fully mandatory scheme? I don’t think that is a particularly good way to go. I think the current CPP with uniform and mandatory contributions has worked and worked well.”

One thing to keep in mind is that a CPP enhancement “isn’t an overnight cure-all for people who plan to retire in the next five or ten years. This is a long-term strategy to deliver a benefit to people decades down the road,” Nunes said.

Panelists agreed the Liberals will move forward with their promise to return the contribution limit to tax-free saving accounts (TFSAs) to $5,500 after it was increased to $10,000 this year. Panelists said the change would likely occur in 2016 and the dollar limit is likely to be indexed.

Panelists also expect the Liberals to make good on their campaign promise to return the Old Age Security (OAS) retirement age to 65. The age was set to gradually increase from 65 to 67 over six years beginning in April 2023.

The Liberals also have said they would increase Guaranteed Income Supplement (GIS) benefits by 10% for single low-income seniors.

The Liberals proposed combining various programs, including the Universal Child Care Benefit, into one program called the Canada Child Benefit. The Liberals have said the program would provide an additional $2,500 for the typical family of four. Panelists said some higher income families will get more than they would have under the current system, but the benefit would be gradually phased out based on income so that those earning $200,000 or more would not receive the benefit.

The Liberals were less specific compared with the NDP on health care, but they pledged to negotiate a new health accord, Stanford said. Whether that will address drug costs remains to be seen, he said.

To hear more of what the panelists had to say, listen to the webcast available on-demand at www.ifebp.org/webcasts.