What do the election results mean for employer-sponsored benefits? Which campaign promises will come into play and how? These pressing questions and more were answered during the International Foundation webcast Inside the New Administration & Congress: What’s Next? The webcast featured three experts from the American Benefits Council out of Washington, D.C: Jim Klein, president; Lynn Dudley, senior vice president of Global Retirement & Compensation Policy and Kathryn Spangler, senior vice president of Health Policy.

“But wait!” you’re probably thinking . . . “I missed it!” Well, you can stop reading this blog right now and go watch the webcast recording yourself (it aired on November 28) or keep reading for a brief summary provided below. 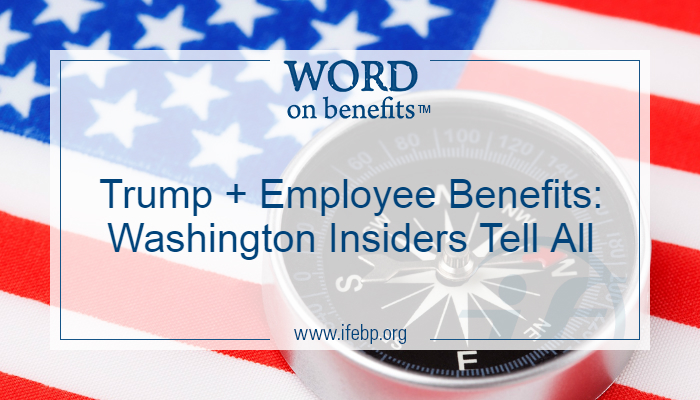 Jim, Lynn and Kathryn covered a few main legislative and regulatory actions that would impact employee benefits. Plans and predictions for health care/ACA, retirement policy changes and paid leave are highlighted below:

Health care/ACA
As we know from Donald Trump’s campaign website, his transitional website and his 60 Minutes interview, the president-elect wants to repeal the Affordable Care Act (ACA). He wants to maintain the requirement to cover pre-existing conditions and maintain the requirement to cover kids up to age 26. Trump also supports insurance sales over state lines and allowing individuals to fully deduct health insurance premium payments from their taxes. Kathryn mentioned that Congress could now use the reconciliation process to repeal major provisions of ACA, like individual and employer mandates, exchange subsidies, Medicaid expansion, ACA taxes (including Cadillac, medical device, insurer and prescription drug taxes). “A Better Way” House of Representatives GOP proposal will be the likely starting point for a replacement plan.

[Related: A Blueprint for Completing 1095-C Reporting To Make a “Good-Faith Effort”]

Retirement
The fiduciary definition is top of mind for many in the industry. The rule is final but hasn’t really been implemented by employers and their providers yet. A delay will likely occur beyond April 2017 so the rule can open for notice and comment. Another point of interest is final state-sponsored guidance from the DOL. States can now create IRA programs for workers who do not have access to workplace savings arrangements. Lynn also mentioned that Form 5500’s comment period has been extended and the reporting requirements won’t go into effect until 2019. Trump has said very little about retirement plans during his campaign run, outside of comments about preserving social security. He has a plan to lower individual and corporate rates. Limiting the value of tax benefits for employer-sponsored retirement savings would be consistent with Trump’s stated position on limiting itemized deductions for taxpayers in high brackets.

[Related: Learn how presidential and congressional election outcomes will likely impact your employee benefit plans at the Washington Legislative Update.]

Paid Leave
State and local laws on paid leave requirement have been enacted but there has not been enough momentum to change these laws on a federal level. Trump did make remarks about supporting six weeks of paid maternity leave and that is a starting point for perhaps Republicans and Democrats coming together—We could see an opportunity for a proposal.