In 2015, 38,300 people were killed on U.S. roads, up 8% from 2014, according to the National Safety Council. In 2014—the latest year for which statistics are available–47,055 Americans died of a drug overdose, including 18,893 deaths from prescription opioid painkillers and 10,574 from heroin. That makes drug overdoses the leading cause of injury death in the United States.

That’s no secret. Drug abuse was something political candidates talked about over the very long presidential race and that Congress is trying to address with legislation. 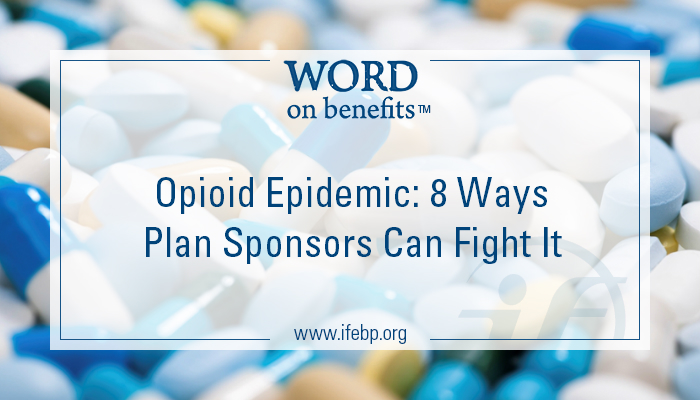 And it’s probably no surprise to health plan sponsors, which have been paying high costs because of addiction and treatment. Costs—and possible solutions—are what Sadhna Paralkar, M.D., and Eileen Flick from Segal Consulting address in “Are You Paying a Huge Price for the Opioid Drug Abuse Epidemic?” in the August Benefits Magazine.

They describe what appears to be the gross overuse of painkiller prescriptions, which in the U.S. hit a high of 282 million prescriptions written in 2012 before gradually dropping each of the next three years to 249 million in 2015. Although the drugs themselves usually are low-cost generics, some physicians are prescribing them in huge volumes. (Paralkar and Flick note that one doctor prescribed a 1,576-day supply to one patient, at a cost of $85,298.) The U.S. accounts for nearly 100% of the hydrocodone and 81% of the oxycodone used worldwide.

Patients who are in pain often expect to be given a drug. Unfortunately, opioids can be highly addictive. Some patients continue to crave them long after their pain is gone, sometimes “doctor shopping” to get prescriptions from multiple doctors. Some patients who know the drugs’ street value sell them for a tidy profit.

Where a market exists—in this case, for addiction treatment—entrepreneurs have moved in with a proliferation of expensive, heavily marketed residential treatment centers. Plan sponsors that cover them end up paying thousands of dollars a day for multiple days. That’s on top of the costs of emergency room visits and hospitalizations when participants overdose.

Not only can these suggestions save plans money, but they also can protect the health of participants. Plan sponsors really can be heroes in the fight against opioid addiction.