The Affordable Care Act (ACA) keeps evolving and revealing new facets. Recently, the U.S. Department of Health and Human Services (HHS) proposed regulations that spell out the implementation of ACA Section 1557. This section of the law prohibits discrimination in health programs on the basis of race, color, national origin, sex, age or disability.

Let’s take a closer look at the new definitions of sex discrimination and gender identity. 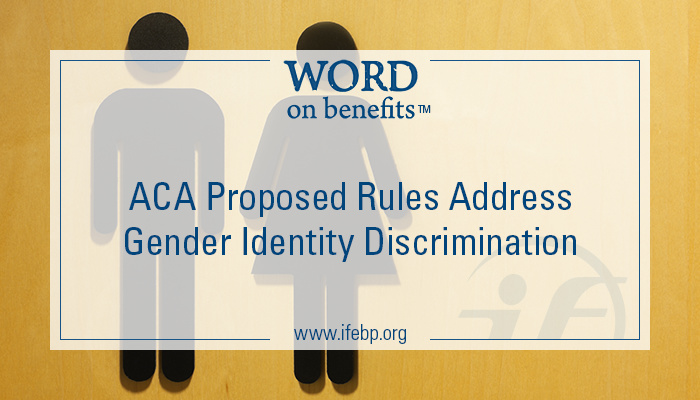 Do these new rules apply to all health plans?

The short answer is no, but it appears that many plans will be affected. The proposed rules apply to any health program or activity that receives financial assistance from HHS, such as hospitals that accept Medicare patients or doctors who treat Medicaid patients. It applies to any health program that HHS itself administers. It applies to the public health insurance exchanges/marketplaces and to all plans offered by issuers that participate in those public exchanges. The rules are written broadly and include benefit plans that health care providers and insurers offer to their own employees even when these plans are self-funded. If an insurer receives any HHS funds, these rules apply to all the health plans offered by that health insurer, not only those sold through a public exchange. Employers that offer self-funded health plans may also be affected if they use a third-party administrator (TPA) that receives HHS funding. This would include TPAs that are part of health insurance companies, also known as administrative-services-only (ASO) providers, if those companies receive federal funding or operate a public exchange plan.

What are the protections against sex discrimination?

These proposed rules provide new protections for transgender individuals and those diagnosed with gender identity disorder or gender dysphoria. HHS expects the cost of extending coverage related to gender identity to be negligible. In addition to equal access to health care, these regulations require covered entities to provide adequate communication of these rights, adopt relevant grievance procedures and designate a responsible employee to coordinate compliance.

Before it releases the final regulations, HHS has asked the public to provide feedback on these proposals overall and on a couple of specific issues:

When will these rules be in effect?

Technically, Section 1557 has been in effect since ACA was enacted in 2010, but these are the first regulations that provide details on how to implement this section of the law. Public comments on the regulations are due on or before November 9, 2015. After HHS reviews the comments received and crafts the final regulations, these rules will take effect 60 days after they are published in the Federal Register.

The International Foundation will keep you up to date—Keep an eye on resources found on ACA Central, ACA University and Regulatory Updates.