President Trump’s January 20 executive order directed his administration to take steps to repeal the Affordable Care Act (ACA). Because ACA is law, the executive action itself cannot repeal the law. It essentially just made repealing ACA a priority.

Even though it’s on top of the administration’s to-do list, it doesn’t mean the undoing will be fast. 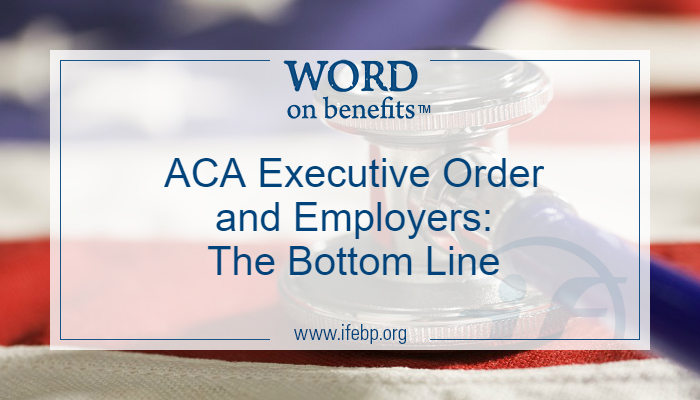 Congressional Republicans are working frantically to repeal ACA but, again, frantic does not equal fast. To date, the Senate and House have passed a budget resolution to draft a repeal bill. This resolution is considered a budget procedure and does not need the president’s signature. The bill places a January 27 deadline for draft legislation to repeal ACA, or Obamacare. However, some legislators are describing the January 27 deadline as a placeholder, indicating that it could take longer. Once the legislation is drafted and passed by both the House and the Senate, it goes to the president for signature. However, if either chamber amends the bill, it can get complicated (read: take longer).

Meanwhile, the executive order also gave regulatory agencies direction to do what they can to expedite the law’s unraveling. Regulations can be changed, but these changes must follow the Administrative Procedures Act, which amongst other things, provides notice-and-comment periods for proposed regulations. This process normally takes months, sometimes years.

There are, however, other ways regulatory agencies can make changes without going through a lengthy process. For example, federal agencies could extend compliance and enforcement delays. Or agencies could be more lenient in interpreting a hardship that gives an individual an exemption from the mandate to be covered by insurance.

While there was chatter about replacing the law “simultaneously” prior to the administration shift, the immediate actions taken to date are focused on repeal efforts. Meanwhile, some legislators are continuing the push for replacement efforts.

Bottom line for employers: For now, ACA is still the law and employers must comply with its provisions.

Confused?  Don’t be.  The International Foundation is following all of this for you at ACA Central and ACA University and will keep you up to date with any actions you need to take.