I always jump at the chance to chat with Certified Employee Benefit Specialist (CEBS) designation holders—each enjoys telling the story of his or her CEBS journey. These backstories about why they decided to spend the considerable time and effort the designation requires and how they went about it are unique and always interesting. That’s certainly the case with Mureth Rhone, CEBS.

I talked with Mureth on the phone in early March, gathering information for a short profile of her for the CEB​S Advantage e–newsletter for Canadian CEBS students. Mureth now works as a senior analyst in benefits delivery for Rogers Communications in Toronto, Ontario. But that wasn’t where she started out, and hearing the soft cadence of her homeland, Jamaica, over the phone made a cold Wisconsin afternoon a little warmer. 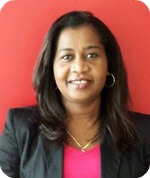 “My exam papers were sent to a test centre in Jamaica. For all three RPA courses I was the only candidate in the room with the proctor.”​ —Mureth Rhone, CEBS

Mureth graduated from the University of the West Indies in management and accounting and eventually worked at a Jamaican company that provided pension administration and investment m​anagement services. In 2002 she began looking for more formal training in pensions, and a friend told her about the CEBS program. The friend was pursuing the U.S. track​ and, initially, Mureth didn’t think that would work for her because U.S. CEBS candidates had to travel to the United States to take exams.

Then she learned she could take exams in Jamaica for the ​Canadian CEBS track​. Years later, that would turn out to be fortuitous. When she took the exams for Retirement Plans Associate (RPA​) courses 1 and 2 in 2003 and RPA3 in 2004, Mureth and a proctor were the only people in the room at the exam center.

Her studies stopped when she achieved the RPA designation. Then, a few years later, Mureth migrated to Toronto and began working at Rogers Communications, where she was exposed to a number of HR service delivery specialties. Her supervisor strongly supported Mureth resuming her CEBS studies because the designation is so recognized and valued in Canada. The supervisor thought additional coursework would give her a deeper understanding of an array of benefits and compensation issues.

Starting in May 2011, Mureth took one course every six months until she completed her CEBS designation in June 2013. A few colleagues also were taking CEBS courses—one completed the CEBS designation the same day as Mureth—and they would motivate each other as they prepared for exams.

Mureth believes all learning is positive. She still works in pensions but said the knowledge she gained about health care, human resources and compensation has helped her make sense of complex issues and bring solutions to the table.