Employee benefits professionals scoured the House Republicans’ proposed Tax Cuts and Jobs Act with some trepidation after its release on November 2, 2017. While many were relieved to find no changes in this draft to the tax treatment of employer-sponsored health care benefits and 401(k) plan contributions, they found that the favorable tax treatment of other common employee benefits might not remain favorable. On the other hand, certain proposed changes could ease restrictions for retirement plan participants and sponsors.

Most employers will experience some changes. Let’s take a look at the benefits that would be impacted by the proposed tax reform. 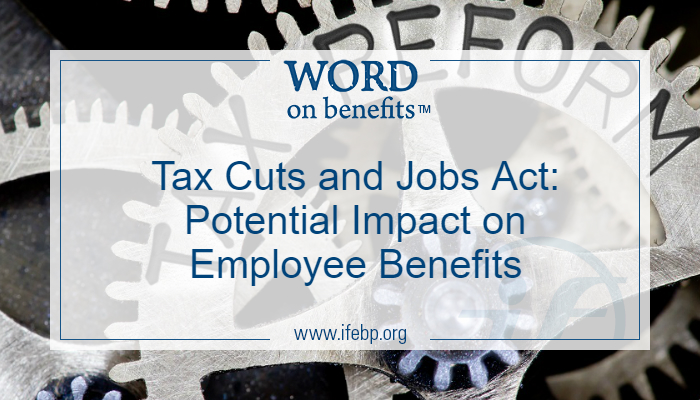 The table below lists many of the benefits that could be affected by the Tax Cuts and Jobs Act and the percentage of employers offering these benefits, as reported in the International Foundation 2016 Employee Benefits Survey.

The Tax Cuts and Jobs Act is only a proposed bill—many changes, additions and deletions will likely be made before it would become law. As it currently stands, here are some components of the bill that would affect employee benefits and how:

Plan sponsors could receive nondiscrimination testing relief on closed DB plans if they give new employees an increased benefit in a DC plan. Cross-testing between DC and DB plans would be less restrictive.

Tax exclusions for employer-provided adoption benefits would be eliminated. Currently, up to $13,570 per child can be provided by an employer tax-free to an employee.

The proposed bill eliminates the current exemption allowing employers to provide employees up to $5,250 per year tax-free in education assistance for undergraduate, graduate or certificate-level education. As the bill now stands, it would be taxable income to the employee.

Relocation stipend deduction would be eliminated.

Under the proposed bill, entertainment expenses are no longer deductible (although business meals would remain deductible).

Employers would no longer be allowed to deduct expenses for qualified transportation benefits such as transit and parking.

Note: Tax-exempt employers would be subject to unrelated business income tax on these expenses.

These plans would now be subject to unrelated business income tax.

There are many proposed changes involving executive compensation and benefits. This blog does not address them.

This list of possible changes is not comprehensive, and the tax reform process is far from finished. The U.S. Senate released its companion bill on November 9, 2017. It differs from the House version. Before a tax reform bill could become law, the Senate and House would have to agree on and pass one version of the bill. If that happens, the tax reform bill they pass would be presented to the president for signature. The final bill would probably look quite different from the proposed bills.

Tax reform is far from over, but the process has started. Expect changes.