Opioid Crisis and the Workforce: A Firsthand Perspective

The opioid crisis has far-reaching impacts in both the United States and Canada, including the workforce.

John S. Gaal, Ed.D., director of training for St. Louis-Kansas City Carpenters Regional Council, saw firsthand the impact opioid abuse has had on the construction industry and has spent the last two years researching the crisis. In a special feature in the July issue of Benefits Magazine, “Perspectives on the Opioid Crisis and the Workforce,” Gaal offered his own take on the crisis and interviewed four experts from the U.S. and Canada. They offer their views on how the crisis started and strategies to treat and prevent the spread of opioid use disorder (OUD). 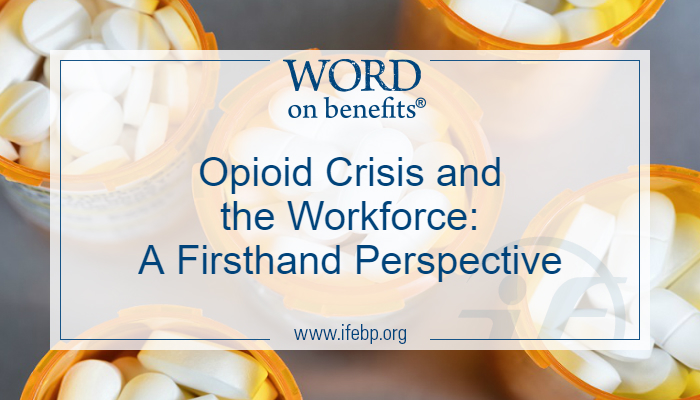 One in three people with depression struggles with substance abuse, explained Joseph Ricciuti, co-founder of Mental Health International and president and CEO of SEB Benefits and HR Consulting Inc. in Toronto, Ontario. Mental illness and chronic pain can exist as dual conditions, and disorders such as depression and anxiety can present both before and after the onset of pain.

“When mental health issues and chronic pain include a pharmacology treatment plan, there is a risk of drug dependency and/or an adverse drug reaction, which creates a volatile environment for abuse and illegal use.”

OUD is a brain disease, which means that someone does not choose to become addicted, said Jenny Armbruster, director of community services for the National Council for Alcoholism and Drug Abuse (NCADA). “Substance use disorder has no boundaries and can happen to anyone. Stopping is not just about willpower,” she said.

Armbruster recommended that prevention efforts begin early, with consistent education to young people, parents and others. Physicians also should talk with patients about the dangers of misuse and should prescribe low amounts of opioid medication. In addition, the current best practice for treatment of OUD includes the use of medication-assisted treatment along with traditional methods such as counseling and social supports.

Members of the British Columbia Government and Service Employees’ Union (BCGEU) in Vancouver, British Columbia witness the opioid crisis in their roles as workers in shelters in Vancouver as well as in their positions as social workers, librarians, trades instructors, sheriffs and correction officers, explained Paul Finch, BCGEU treasurer. The shelter workers “are often equipped and trained with naloxone kits for rapid overdose response. These workers administer critical life-saving aid, sometimes up to a dozen times a day.”

As a result, the union has designed comprehensive occupational health and safety training materials that include discussions of post-traumatic stress disorder (PTSD), trauma and harm reduction.

“OUD not only destroys opioid users, but it often destroys the families caring for them,” said Don Willey, business manager of the Laborers’ International Union of North America (LiUNA) Local 110 in St. Louis, Missouri. “An employer may be a caregiver dealing with a loved one struggling with OUD and on many occasions will experience a concept known as presenteeism. So employers can’t isolate the effects of this problem with a drug-testing program alone.”

Willey described efforts by the union’s health and welfare fund to address the crisis as well as other union education programs and efforts in the community to address treatment options.

“When it comes to OUD, the one thing that seems to be clear is that no silver bullet exists to overcome the opioids/heroin crisis,” Gaal wrote. However, there are ways health care providers, employers and unions may address the problem.

Strategies include new approaches to pain management, analyzing claims data to detect potential drug problems and limiting pain medication, among others. Finally, Gaal highlighted an eight-hour certification course called Mental Health First Aid that can help supervisors and peers identify employees who may require counseling before they turn to masking their problems with addictive substances.

Read the full article  “Perspectives on the Opioid Crisis and the Workforce” in the July issue of Benefits Magazine.