Mapping Out What’s Next for Health Care Reform

At a recent meeting to catch up on the week’s ACA repeal and replace happenings, our resident benefit experts Julie Stich, CEBS and Kelli Kolsrud, CEBS were in rapid fire discussion, reminding each other of the many steps it takes to pass a new health care reform law. While many of us are familiar with the law needing to pass both chambers—the House and the Senate—before the president signs it into law, Kelli and Julie were bantering about the many other steps that can accompany those major events. I asked them to slow down and bring me up to speed.

Here’s what they said. (Bonus for more visual learners—I’ve sketched this all out.) 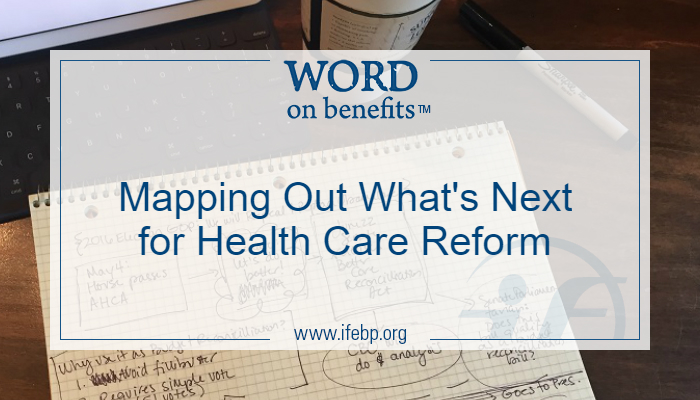 Kelli: They certainly do. It is one of their top priorities.

Julie: The House of Representatives crafted a bill called the American Health Care Act (AHCA) and passed it on May 4. Then it was sent to the Senate.

Kelli: Senate Republicans decided not to vote on AHCA as written by the House. They had their own ideas about what should be included in a repeal and replace bill. Last week GOP Senators released a discussion draft of a bill they created. They took the AHCA language and made additions and deletions to come up with a new bill called the Better Care Reconciliation Act (BCRA). 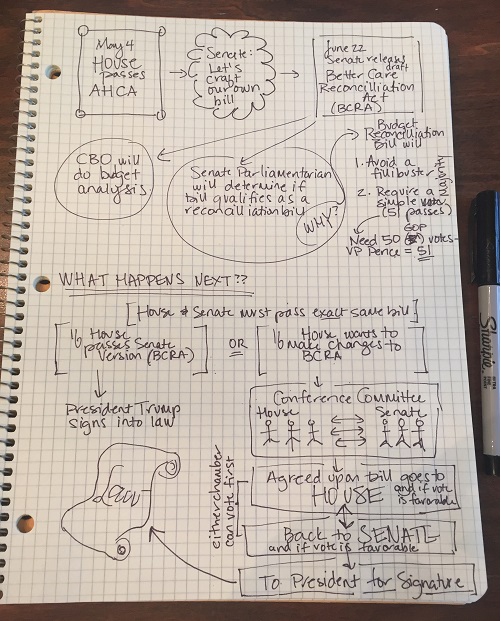 Julie: Before all the senators can vote on the BCRA, the Congressional Budget Office must release their report estimating the cost and impact of this bill.

Julie: Sure. In most cases, a simple majority gets a bill passed. In the Senate, it’s 51. In the House it’s 218 of the 435 representatives. If the vote is favorable, the bill moves to the other chamber; if it’s unfavorable, the bill dies.

Kelli: So what is the deal with needing 60 votes in the Senate?

Julie: The Senate has special rules that allow for unlimited discussion and debate – including filibusters. This means debate on a bill can go on and on. To end debate, a “cloture” vote is required, meaning three-fifths of the Senate—or 60 members—have to vote that the debate should end. Over the past several years, when we’ve seen partisan voting (along party lines), it’s been challenging to get 60 votes to end a debate which is the only way to call for a vote on the bill itself where a simple majority will pass it.

Kelli: So instead they want to use the reconciliation process which limits debate on a bill to 20 hours in the Senate – in other words, no filibuster. With this health care reform bill, there are bound to be several amendments proposed for the discussion draft and much debate, but because of the reconciliation process the time for debate will be limited. When debate ends, a vote is called, and a simple majority of 51 votes is all that’s needed to pass a bill.

Listen to more straight talk about all things benefits with Julie, Kelli and Justin on the new Talking Benefits Podcast! Subscribe to Talking Benefits on iTunes, Stitcher or your favorite podcast app, or watch for new episodes on the International Foundation right here on the Word on Benefits.

Julie: In order to use the reconciliation process, a bill needs to have some fiscal or budget impact—tax, spending or debt implications. This process can only be used a limited number of times per year and Congress has chosen to use it for health care reform.

Kelli: Of course, Republican senators would prefer to only need the simple majority vote because the current makeup of the Senate is 52 Republicans, 46 Democrats and two Independents who typically vote with the Democrats. Therefore, if all the Republicans vote in favor of the repeal and replace bill it will pass.

Julie: In fact, only 50 senators would need to vote for the proposed bill because if there’s a 50-50 tie, the Vice President, as leader of the Senate, votes and breaks the tie. Vice President Pence would, of course, vote with the Republicans.

Kelli: But even if the Senate passes the BCRA, we’re not done. There would be two different versions of repeal and replace legislation and to get it enacted, the bills have to be identical.

Julie: If the House is willing to vote on and then approves the Senate version, it goes to the president. If the House does not want to accept the Senate version, the House suggests a conference committee be formed. At that point, if the Senate backs down and agrees to vote on and then approves the House version, it goes to the president. But if both the House and Senate agree to disagree, they set up a conference committee made up of conferees from each chamber. The bill is debated and may be changed by the conferees. There can be lots of back-and-forth among the conferees until they settle on one version of the bill. (If they never settle on one version, the bill dies.)

Visit Future of ACA for the latest on ACA repeal and replace efforts.

Kelli: Then the settled-upon version goes to a vote again in each chamber and if both chambers pass the bill, it goes to the president. President Trump also made repealing and replacing ACA a priority so he is expected to sign the bill into law.

Julie: It’s a complicated process and the amount of time to accomplish this can vary. For this legislation, the Senate is hoping to pass a bill as early as this week (before the July 4th holiday break) or, at the latest, before the end of July. Congress is typically not in session during the month of August and reconvenes after Labor Day.

Kelli: That about covers it. Stay tuned! We’ll keep you informed!