The retirement population is set to boom. Baby Boom, to be exact, as people born between 1947 and 1966 are at or nearing retirement age. This explosion of employees and plan members nearing retirement brings an opportunity for financial education, writes Alexandra Macqueen in the November/December issue of Plans & Trusts. As workers move from building a nest egg to cracking it open as a source of income, Macqueen suggests educating them on three retirement risks: sequence of return, inflation and longevity. 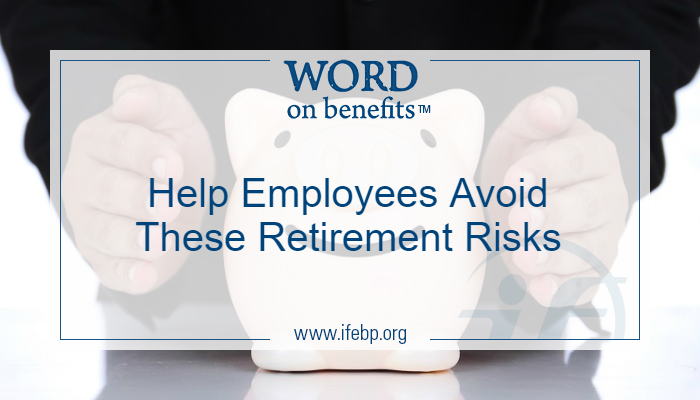 People often think about a fixed rate of return, say 7%, on long-term investments. But this rate is an average. The actual rate of return will experience volatility, moving above and below that number, sometimes greatly, while averaging 7%. In the Plans & Trusts article “Beware of Averages: Understanding the New Risks of Retirement,” Macqueen provides a hypothetical example in which three-year cycles of returns vary between +7%, −13% and +27% (for an arithmetic average of 7%). Sometimes the negative return comes first, sometimes the positives, etc.

Negative returns at or early in retirement “can significantly reduce the number of income years a portfolio will provide, even if those negative results are followed by strongly positive returns,” Macqueen writes. In her example, even though investors get the same long-term average return in each case, they might experience as many as eight additional years of income (if the three-cycle begins with +27% and +7%) or five fewer years of income (if the cycle begins with −13%).

This can mean the difference between a 65-year-old retiree running out of money at the age of 81 versus the age of 94.

“This effect is overlooked when a fixed long-term rate of return is used to forecast retirement income,” Macqueen notes. Increased knowledge of this risk can help employees be aware of the need to postpone retirement or otherwise protect their assets a few years before retirement and in the first decade of withdrawals.

Overview of Retirement Plans Online Course (U.S.)—designed to provide a review of retirement plans including the history and objectives of retirement plans, income sources in retirement, defined benefit and defined contribution plans, the role of plan sponsors and what qualifies as a plan

The 1970s and ’80s: Disco was big, hair was big—and so were the inflation rates. Even though inflation (and hair) is lower today than in previous decades, it still has the power to erode retirement savings.

“Nowadays, inflation functions more like a slow, persistent drip, gradually siphoning purchasing power from retirement wallets,” Macqueen writes. “Over long time periods—such as a 30-year retirement—even a low inflation rate can eat away at the spending power of saved dollars.”

She notes that employers can remind workers to consider a savings buffer to cover rising costs when they are estimating their spending needs in retirement.

The Retirement Landscape online course—provides a basic understanding of what retirement income needs are and how retirement plans work to meet these needs.

“I’m like a fine wine. I get more expensive with age.”

As wine ages, complex changes in flavors, colors and aromas can lead to exciting new characters—and increased value. The complexity of human aging often reveals new character traits as well. However, these changes may lead to higher costs for health care, assisted living and other needs that decrease retirement savings.

Longevity risk, or the risk that a member outlives his or her retirement income, amplifies the dangers of other financial hazards in retirement, Macqueen notes. And here’s another catch: Nobody knows how long retirement will last. The average length of retirement is about 20 years, but some people will get 35 years or more. Even the Magic 8-Ball, created in 1950 and firmly at retirement age, would have to answer “Reply hazy; try again” to its estimated length of retirement.

“It’s as though people are being asked to sufficiently gas up a car for an entire road trip without knowing the distance to their destination,” Macqueen writes. This is an opportunity for employers to suggest employees plan for a long retirement and explore sources of guaranteed lifetime income such as Social Security/Canada Pension Plan, defined benefit pensions and annuities.

Your employees aren’t average. Likewise, their retirement experiences probably won’t be average, whether it’s average life expectancy, average rates of inflation or average long-term returns. Organizations that help workers prepare for retirement risks by learning about and planning for randomness and variability can potentially benefit from reduced stress and increased productivity in late-career employees—not to mention helping them be better than average in retirement preparedness.