Remember last summer when the weather was warm and sunny and you thought the SBC guidance was finalized? Surprise! Now there’s a sequel! In February 2016, federal agencies proposed a revised version of the Summary of Benefits and Coverage (SBC) template and its related documents. These revisions reflect changes announced in the final regulations released in June 2015 and recommended by stakeholders after further discussion and consumer testing. 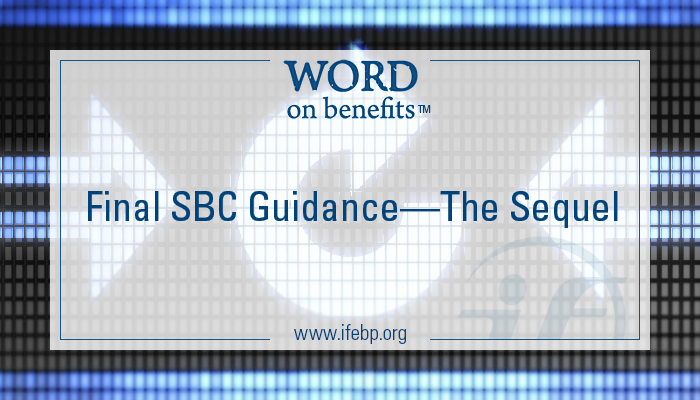 The Affordable Care Act (ACA) requires all health plan issuers and sponsors (insured and self-funded) to provide an SBC to all individuals eligible for health coverage. For employers, this is typically done during open enrollment and shortly after a new hire. The SBC is a written document describing the benefits and coverage available under a health plan. It is intended to help individuals make apples-to-apples comparisons among health plan options and better understand and use their own coverage.

Many employees do not understand many of the common concepts that are a part of their health plans, such as deductibles, copayments and coinsurance. Therefore the new SBC template has added the following:

As required by the final regulations, the proposed SBC revision includes information about whether the plan meets the ACA requirements for minimum essential coverage and minimum value, plus more explanation of what that means to an individual’s taxes. The proposed revision also adds a third coverage example for a simple fracture (the other two examples are focused on having a baby and managing type 2 diabetes) and provides clearer information on how cost sharing would apply to all three examples.

[Related: Will ACOs Go the Way of HMOs and What Is the Difference Anyway?]

The proposed SBC template revision is open for public comment until March 28, 2016. After that date, the federal agencies will review the comments and finalize the template and its related documents. According to recent guidance, plan sponsors and issuers will be expected to use the new template for the first open enrollment period on or after April 1, 2017. As a result, if an employer’s plan year starts at the beginning of January, the new SBC template must be distributed on the first day of the enrollment period before the beginning of the 2018 plan year.

Stay tuned! The sequel (final SBC template, instructions and glossary) to this sequel will be coming in the months ahead. We’ll let you know when it’s released.