Now that the controversial Bill C-377 has received Royal Assent, how should benefit plan sponsors respond? The bill first must survive a potential change in majority rule following this fall’s federal election and anticipated legal challenges. If it remains intact, experts say sponsors of some types of plans will be torn between a responsibility to keep plan members’ personal information confidential and the bill’s requirement to disclose the information publicly. 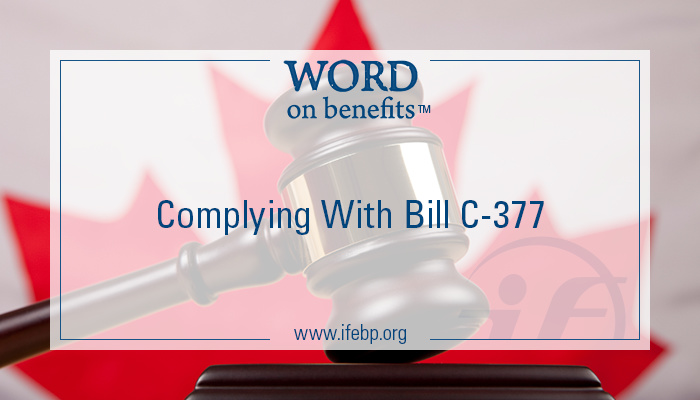 The bill requires these payments to be reported to the Canada Revenue Agency (CRA) and published on a website.

Experts I spoke with say the bill has a wider impact than many realize because of its broad definitions of labour trust and labour organization. They contend those broad definitions could mean that nonunion organizations, such as employer associations, would also have to comply, and any trust or fund, including a mutual fund that has a union member as a beneficiary, could be affected.

The bill isn’t as expansive as when it was introduced four years ago. As first proposed, the bill would have required most union-sponsored plans, including registered pension plans and others, to reveal the names of members and beneficiaries who received payments in excess of the $5,000 threshold. It was later amended to exempt registered pension plans, group sickness or accident insurance plans, group term life insurance policies, private health services plans and supplementary unemployment plans.

Funds that could still be affected by the disclosure requirements include those that provide self-insured death benefits, vacation pay, bereavement leave, jury duty leave and training funds. In addition, a trust that provides mostly exempt benefits but includes one of the nonexempt benefits could be subject to the required disclosures, experts say.

The bill’s opponents — including the Canadian Bar Association, the National Hockey League Players’ Association and seven provinces — say it potentially violates the privacy of millions of Canadians and question its constitutionality.

Supporters include Merit Canada and the Canadian Federation of Independent Business. The supporters argue that because unions receive tax benefits and influence the political process, their activities should be disclosed. They also contend that other countries require public disclosure of union finances.

The specific regulations haven’t yet been created, but it appears reporting requirements would apply to the 2016 calendar year, with first reports due in 2017. CRA has not provided guidance on how to report the information.

Once the regulation goes into effect, organizations will have to track transactions individually and in the aggregate, because if the sum of transactions with one entity reaches the $5,000 threshold, it will have to be reported. For example, experts I talked with said a vacation pay trust fund would have to track how much vacation pay each member receives in a 12-month period. The fund would have to make a disclosure if the pay exceeded $5,000.

Most funds are already audited regularly, so they track the raw data but don’t typically report this level of detail. The new requirements could be an administrative burden for small local union funds.

With the federal election on the horizon, we probably have not heard the last word on Bill C-377.

Learn more about Bill 377 at the at Annual Canadian Employee Benefits Conference in November and the Institute for Apprenticeship, Training and Education Programs in January.