The loss of a loved one may force workers and employers to blend their personal and professional lives which can be sticky for all involved. Even though your organization likely has a detailed, written bereavement leave policy that provides a specific number of days of paid leave, can all situations be considered the same? 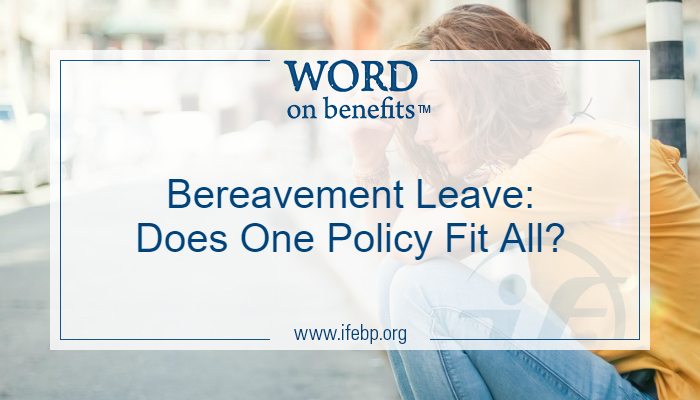 According to the International Foundation Paid Leave in the Workplace: 2017 Survey Results, 94.2% of all responding corporate and public employee organizations provide some type of paid bereavement leave, either through a separate bereavement leave policy or a paid-time off (PTO) program for their workers.

Although most employers offer at least some type of paid bereavement leave, the number of paid days away from the office varies greatly among organizations and is dependent on the employee’s relationship to the deceased. Policies may not address whether the deceased was a parent to young children or other circumstances which may affect your worker.

Facebook announced earlier this year, followed by Mastercard, Inc. that they were doubling the amount of time their employees receive for bereavement leave to 20 days following the death of an immediate family member and up to 10 days for an extended family member. Sheryl Sandberg, Facebook’s Chief Operating Officer, who lost her husband suddenly in 2015, leaving her with two young children while working as a technology executive, has first-hand experience juggling work and family during a profound loss.

Currently, most employers cannot compete with the generous benefits provided by Facebook and MasterCard. According to the International Foundation survey, corporate and public employers provide a range of days of paid bereavement leave to employees for the loss of immediate and extended family members. The full report, to be released September 12, will include a breakdown of the number of days offered by most employers by family relationship. Here is a preview of the average number of paid bereavement days provided by our responding organizations: 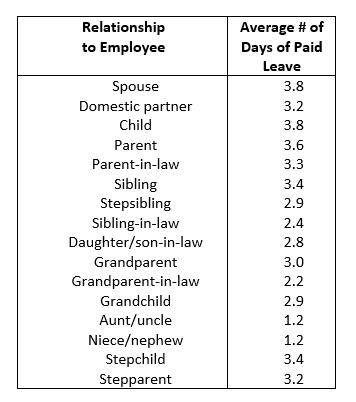 The International Foundation survey provides some reassuring news for employees who may need more time off than the traditional bereavement policy offers:

Workers often request bereavement leave at a time of emotional distress. Pairing a well-designed policy with a supportive, caring, solutions-oriented discussion may result in a bereavement policy fit for all.