When to Claim Social Security Deserves Some Thought

A couple of years ago, I had a conversation with an older relative about claiming Social Security benefits. Like most people, he began getting Social Security at 62. When I said I hoped to wait until I reached 70, he was incredulous.

Why would anyone delay collecting a retirement benefit for eight years? That would mean forgoing thousands of dollars in income—money I could invest if I didn’t need it to live on. And what if I were to die before I reached 70 and never collect a penny? (That’s almost what happened to another relative, who died a month after turning 62 and received only one check.) 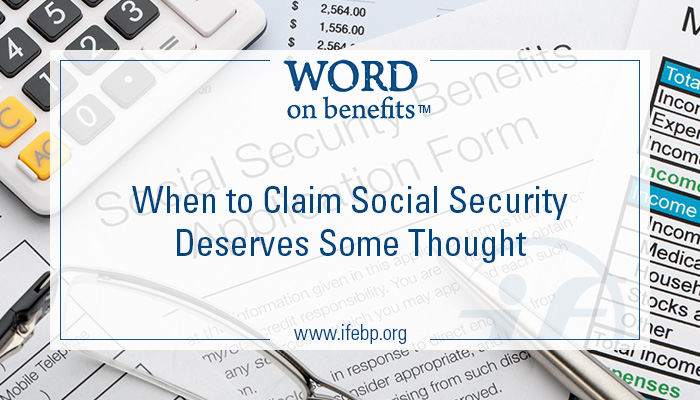 Everyone’s circumstances are different. Some people have excellent reasons to take Social Security as soon as they can. For example, because of health problems, they truly don’t expect to be around for more than a few years. But in an article in the April issue of Benefits Magazine, Bruce D. Schobel, CEBS, asserts that the common decision to begin collecting at 62 “often appears to be thoughtless.”

In “When to Claim and How to Optimize Social Security Benefits,” Schobel points out that Social Security is the only inflation-adjusted source of retirement income for most people. Longevity is increasing. Many more people are expected to reach the age of 85 and beyond, when “having the largest possible Social Security benefit is very desirable, if not essential,” Schobel writes, “because the oldest retirees have the fewest options for getting additional income . . . and their assets may already have been consumed when they were younger.”

[Related: When to Claim and How to Optimize Social Security Benefits, Benefits Magazine]

Schobel, a former president of the Society of Actuaries, goes into some detail about what happens to benefits collected at 62, normal retirement age (NRA), 70 and other ages between 62 and 70. The bottom line is that the age-62 benefit is only 75% for someone whose NRA is 66 and falls to 70% for a younger worker with an NRA of 67. These benefit reductions are permanent.

But someone who is 70 today and begins collecting Social Security will receive a benefit that’s 132% of his or her NRA benefit. That goes down a little—to 124% of the NRA benefit—for a worker with an NRA of 67.

There are other interesting benefits-claiming strategies for spouses, including a simple one called get some now, get more later, that works best when one spouse has much greater earnings than the other and is older.

It’s worth learning as much as you can before making a decision about when to claim Social Security: