The Haze of Medical Marijuana and Benefits

From an employee benefits perspective, medical marijuana, in a way, is in the same place same-sex marriage was not so long ago—Laws in a number of states said one thing and federal law said something altogether different. The federal government still considers marijuana a Schedule I controlled substance that can’t legally be used for any purpose. But so far, 24 states and the District of Columbia have either decriminalized or legalized the use of medical marijuana.

That leaves employers, employees and health plans “mired in the weeds,” according to attorneys Diana M. Bardes and Paul A. Green from the Washington, D.C. law firm Mooney, Green, Saindon, Murphy & Welch, P.C. 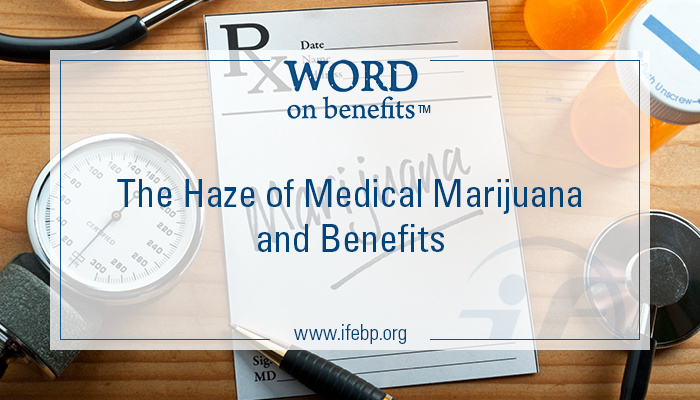 In the cover article in the October Benefits Magazine, “Getting Out of the Weeds: Medical Marijuana and the Workplace,” Bardes and Green attempt to clear away some of the smoke surrounding health care coverage of medical marijuana, employer drug policies in states where it’s legal and what—if any—reasonable accommodations employers must make.

First off, a health plan doesn’t have to cover medical marijuana. What’s not clear is whether a health plan even can cover it. If coverage is provided, the benefit would be taxable. Bardes and Green note that VEBAs are tax-exempt trusts, and there’s an argument that if a VEBA covers the cost of medical marijuana, it could lose its tax exemption. However, they write, if less than 3% of the VEBA’s total expenditures are for nonpermitted purposes, its tax-exempt status should be safe.

[Related: Marijuana, e-cigarettes and transgender issues: Are your policies current?]

A recent Colorado Supreme Court decision provides some clarity to employers—at least those in Colorado—about the ability to fire employees who fail random drug tests. In the Colorado case, an employee had sued his employer for doing just that. The employee had a valid medical marijuana prescription and argued that because Colorado law says someone can’t be terminated for legal off-the-clock behavior, his termination was illegal. The court disagreed, saying that because medical marijuana remains illegal under federal law, Colorado’s lawful-activities statute didn’t protect him in this case. Bardes and Green caution that employees should be aware of their employer’s policy, and employers should be aware of their states’ laws.

Because marijuana remains illegal under federal law, employers don’t need to provide any Americans with Disabilities Act accommodations for employees using medical marijuana, and some state courts have reached similar conclusions with regard to state laws. However, legislatures in New York and Nevada have said accommodations must be made for employees who are using medical marijuana legally. These are just some of the issues. This area of law is still developing, so employers, employees and health plans need to stay informed about changes in federal and state laws.