While young men still commit a disproportionate share of crimes, it appears crime rates among the elderly are increasing in some countries. Rising poverty rates among the elderly are being blamed. Consider the “Opa Bande” (“Grandpa Gang”)—Bloomberg Business tells of three German men in their 60s and 70s who were convicted in 2005 of robbing more than one million euros (US$1.09 million) from 12 banks. At their trial, the members of the gang testified that they were trying to top up their pension benefits. One defendant said he used his share to buy a farm where he could live because he was afraid of being put in a retirement home. 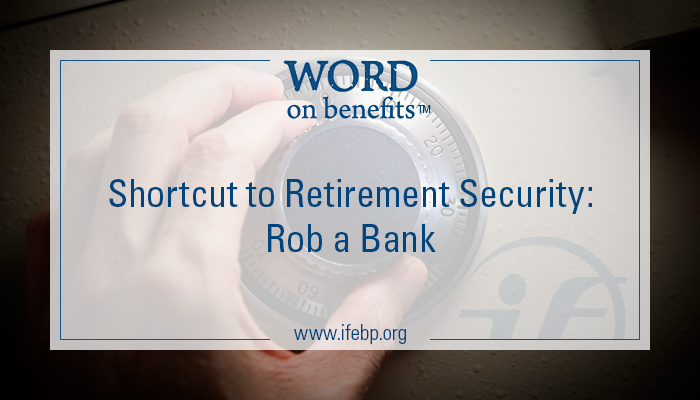 Fortunately, the overwhelming majority of workers who move into retirement with insufficient funds to provide the life they envision will not be turning to crime. But stories of elderly crime draw much-needed attention to the importance of planning for retirement security.

It is more likely seniors will cut their living expenses and, perhaps grudgingly, accept that the final years of their life will not be all that they had hoped. There may be children or other family members who will step in and provide assistance in the form of housing, money and so forth. It is predicted many will attempt to close the gap between their retirement income and expenses by working longer. Employment in later life is making a comeback, with an increasing number of persons staying in the workforce past what is considered the normal retirement age. This increase in labor force participation is expected to continue.

While some workers view working longer as a positive, this is not true for everyone. Some who are working will be disappointed they have neither the time nor the money to enjoy their later years as they had hoped. Of course, another difficulty is that not all who want to work may be able to do so due to poor health, a lack of job opportunities or other factors. Retirement for persons who cannot find work may be filled with financial challenges, mental stress and an unwelcome dependence on others. For workers doing manual labor, personal health and safety may become an issue.

Beyond concern for the financial well-being of retirees, are there other reasons employers, plan sponsors and plan administrators should be concerned about the retirement security of workers? Yes, and here are a few reasons why.

For strategies that employers, plan sponsors and administrators can use to help workers achieve retirement security and make working longer a positive scenario for both employers and employees, read: The Path to Retirement Security in Canada: How Employers and Plan Administrators Can Help.