A recent decision from the U.S. Supreme Court may make it harder for ERISA health care benefit plans to recover benefits paid when a plan participant receives a settlement from a third party. As a result, plan sponsors and administrators may wish to review their plan documents and strengthen their recovery practices to ensure they recoup plan assets when appropriate. 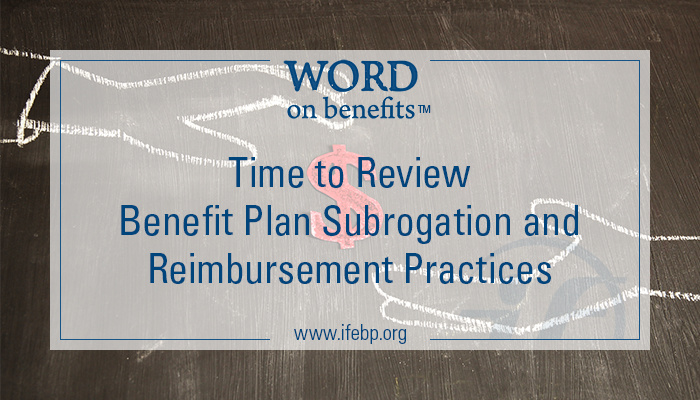 What is subrogation and third-party recovery/reimbursement?

Most health benefit plans exclude medical coverage for plan participants if their injuries are the fault of a third party. However, these same health plans often pay the benefit claims as soon as they are received, even if they suspect or know a third party may eventually be found to be responsible. This shields workers from the financial burdens due to severe injuries and illnesses resulting from accidents, negligence or malpractice. But, these health plans also require plan participants to reimburse the plan for the medical benefits paid if the participant receives a settlement or jury award from a third party. These settlements and awards typically come from payments made by automobile, workers’ compensation, homeowners or commercial property insurance.

Subrogation is the legal process that allows a self-funded health plan or insurance company, after paying medical expenses, to recoup that money from another legally liable party. Third-party recovery/reimbursement rights refer to a health plan’s right to get reimbursed for medical expenses it paid when a participant receives a settlement or jury award. For example, if a worker is injured in a car accident and requires medical treatment, often the medical bills are paid by the worker’s health plan. However, if the accident was the fault of another driver and the worker receives a settlement or award from the other driver’s auto insurance company, the health plan may have the right to be reimbursed from that settlement or award for the amount of medical expenses it already paid. It’s estimated that insurance companies and self-funded health plans recover more than $1 billion each year through subrogation and third-party recovery efforts. Most health plan documents include language that spells out the plan’s rights for subrogation and third-party reimbursement.

What did the Supreme Court decide?

In the case, Montanile v. Board of Trustees of the National Elevator Industry Health Benefit Plan, the Supreme Court ruled by a vote of 8 to 1 that a worker (Robert Montanile) who was injured by a drunk driver could not be required to reimburse the ERISA health plan from the settlement he received because he had already spent some of the settlement on “nontraceable” items, such as food and travel. The health plan’s documents specified that its policy was to assert its reimbursement rights, and the Court agreed that the health plan had these rights. However, the plan did not assert its rights fast enough (the plan’s Board of Trustees waited six months to file suit), and the worker had already spent part of the settlement on items that the Court called nontraceable by the time the plan sued. As a result, the court ruled the plan lost its chance to recoup the money already spent. Because Montanile appears to have not spent all of the settlement, the Supreme Court sent the case back to the lower courts to determine if there are identifiable funds or property that may be recovered.

What does this decision mean for health benefit plan sponsors?

Guarding plan assets is a fiduciary responsibility under ERISA. Although finding out about and pursuing third-party recoveries can be challenging and time-consuming, plan sponsors have an obligation to do so, if it is feasible and in the best interest of the plan and its participants. Because of the Court’s decision, health plans will need to spend more time and money to keep up with the pace at which plan participants can obtain and spend their settlements and awards. If health plans are not fast enough, they will lose out on reimbursements. This will increase overall plan expenses and may result in increased premiums. In light of the Montanile decision, as a plan sponsor you may wish to:

Are there other consequences?

This Supreme Court decision’s effect may not be limited to health benefit plans. Similar situations could arise with pension or disability benefit overpayments because of fraud or unintentional errors. The Court ruling may limit a plan sponsor’s ability to recover these overpayments if the money has already been spent on consumable or intangible goods or services, such as everyday living expenses. This decision may also result in health plans reconsidering or delaying the payment of medical expenses in situations that involve injuries caused by a third party. This could place additional financial burdens on injured plan participants and negatively affect their access to necessary health care.