In April, the Pension Benefit Guaranty Corp. (PBGC) released a policy statement titled “Requests to Review Multiemployer Plan Alternative Terms and Conditions to Satisfy Withdrawal Liability.” I’ll share my takeaways from reading it and attending a media call with Tom Reeder, Director of PBGC, and, other agency officials. 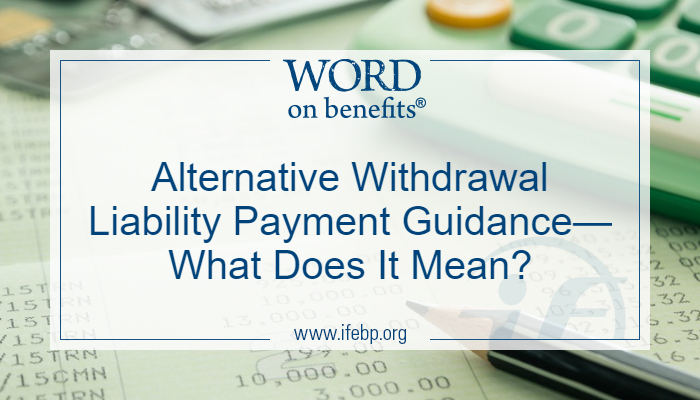 What is a multiemployer plan?
This is a collectively bargained benefit plan maintained by more than one employer, usually within the same or related industries. Multiemployer plans are governed by a board of trustees with labor and management equally represented. Most multiemployer defined benefit pension plans are in reasonably good shape to provide full benefits to their participants and beneficiaries. A small percentage of plans are facing severe financial difficulties. These troubled plans are categorized as being in “critical and declining status.”

What is withdrawal liability?
Withdrawal liability (WL) is the financial responsibility of a contributing employer to make contributions necessary to fund vested pension benefits when the employer leaves the multiemployer defined benefit plan. In other words, withdrawing employers are obligated to make payments to the pension fund to pay future liabilities. WL payments help plan funding and decrease risk to remaining employers, plan participants and the PBGC multiemployer insurance program.

What is the existing withdrawal liability structure?
Under Employee Retirement Income Security Act (ERISA) section 4219(c)(1), an employer’s WL must be paid over the number of years necessary to amortize its WL, with a 20-year cap. The plan calculates the annual amount of WL payment due under a formula set forth in the statute for determining a withdrawing employer’s share of the plan’s unfunded vested benefits. The amount is intended to approximate the employer’s historical contributions.


AWL option is available. One of the goals of the guidance is to advertise that these AWL opportunities do exist for financially troubled plans. PBGC wants any trustees who are unaware of AWL to start evaluating whether it is good for their plan.

There are no new rules in this guidance. PBGC released the guidance in order to make it easier for troubled plans to come to PBGC with an AWL proposal. ERISA already provides plan sponsors with some latitude regarding the satisfaction of an employer’s withdrawal liability.

The guidance is about payment rules. Withdrawal liability has two key aspects. This guidance is about (1) how employers satisfy the WL that is due. It is not about (2) the method of determining a withdrawing employer’s share of the plan’s unfunded vested benefits.

PBGC offers help. If you want to discuss an alternative approach, PBGC welcomes informal consultations with trustees and their advisors. PBGC will help by answering questions so trustees understand the issues before undertaking the time and effort of an AWL review request.

AWL proposal is proactive. An AWL proposal is intended to address events that may occur. AWL aims at discouraging continued withdrawals, encouraging the continued commitment of contributing employers to the plan, extending the amount of time before the plan runs out of money, and avoiding a potential mass withdrawal termination.

What AWL means: In order to deviate from the existing ERISA rule, the board of trustees has to adopt AWL payment rules by amending the plan. In other words, AWL is a global rule of the board of trustees that applies uniformly to all employers. AWL is not when trustees negotiate a one-off agreement with an employer to pay less WL than owed based on the employer’s ability to pay.

Discounting is the lead example. The example in the guidance, “offering incentives for employers to remain in the plan in the form of withdrawal liability relief,” was given because discounted WL is what employers want.

Alternative payment rules are a relatively new thing. PBGC officials said the agency has no rules on adoption of AWL payment because it’s a relatively new phenomenon. After the Pension Protection Act of 2006 (PPA), plans had to start reporting zone status to contributing employers. This was the first time some employers became aware that they had liability to the plan beyond their collective bargaining contribution obligation. The Multiemployer Pension Reform Act (MPRA) sharpened focus on the future potential for insolvency in some plans. PBGC has received an uptick in trustees asking the agency about AWL payments and what the agency looks at in order to approve AWL. PBGC has approved a couple of AWL proposals.

Reasons for guidance suggesting AWL. In the review request, PBGC needs to see that the plan will be better off as a result of implementing AWL. In other words, the alternative rule will keep employers—those that otherwise might withdraw or significantly reduce contributions in ways that would hurt the plan—in the plan and making contributions. As a result, the plan’s solvency would be extended. PBGC would welcome such a result because retirees would get full benefits for a longer period of time.

The plan proposals are complex and time consuming. PBGC reviews on case-by-case basis. It takes a lot of analysis by trustees and their advisors to determine if the AWL proposal is beneficial to the plan. The same goes for PBGC. The recent proposals PBGC has reviewed involve many contingencies. For instance, it may be hard to predict how stakeholders will act in light of AWL and in comparison with the existing WL rules, or how the plan will be able to collect WL in various scenarios. PBGC weighs the comparative cost and benefits to the various, and, potentially conflicting, interests at stake in the proposal—the plan, participants, employers and pension insurance system as a whole. This is why PBGC decisions on approval do not happen overnight. PBGC aims to complete reviews within 180 days for less complex proposals or within 270 days for more complex proposals.

Trustees must provide the following information to PBGC.

More details about the PBGC review process. PBGC looks to whether trustees have supported their conclusions that the AWL proposal would realistically maximize WL collection and projected contributions, relative to the existing WL rules. PBGC also considers whether the AWL proposal is in the interests of participants and beneficiaries, does not create an unreasonable risk of loss to the insurance program and otherwise is consistent with ERISA and PBGC regulations. The reviewer will stress test the actuaries’ projection to confirm credible projections and whether projections need adjustments, depending on PBGC’s view of what might happen in the plan. PBGC may initially discuss with the board of trustees and go back to the trustees for further followups throughout the process. If PBGC finds that the proposed AWL may create an unreasonable risk of loss to plan participants and beneficiaries and to the multiemployer pension insurance program, PBGC will go back to the trustees to discuss possible changes to reduce that risk.

All critical and declining plans should be considering this. To a plan facing insolvency within the coming two decades, every amount of WL that trustees can collect is important, because it allows the plan to pay benefits at a higher rate than the PBGC guarantee.

PBGC approval is not required. It is important to note that plans can adopt an AWL method on their own if they want to. It seems likely, however, that very few will do so without PBGC approval that such AWL terms and conditions are consistent with ERISA.

Amendment of the plan is subject to fiduciary standards. The decision to modify or reduce an employer’s WL is subject to ERISA Title I fiduciary standards. “We’re not signing off on their fiduciary obligation [but] the PBGC will offer a significant amount of due diligence to requests for approval of alternative payment methods,” Tom Reeder said. He advised trustees to seek the offered PBGC oversight before adopting the AWL rule.

Conclusion
To wrap up my takeaways: PBGC encourages trustees of plans in critical and declining status to read the guidance and reach out with questions about whether their plan could benefit from AWL. Some plan sponsors feel more comfortable getting PBGC approval, and PBGC is happy to consider AWL proposal review requests. PBGC joins trustees in looking for ways to keep employers in plans and maximize ability to pay pension benefits. Any amount of extended plan life is good for all stakeholders.