ACA—Employers May Not Love It But Don’t Support Repeal

In May 2016, the International Foundation deployed its seventh annual survey in a series of how single employer plans are being affected by the Affordable Care Act (ACA). The 2016 Employer-Sponsored Health Care: ACA’s Impact gave respondents the opportunity to share opinions of the law as a whole. In addition, respondents communicated whether their view of the ACA has changed since its enactment in 2010, and whether the law should be completely repealed.

How are employers feeling about ACA? At first glance, survey respondents appear a bit conflicted. Let’s take a closer look at the feedback. 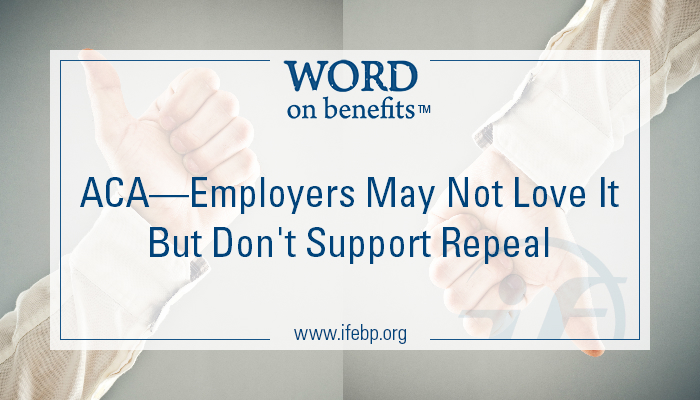 Three in five respondents (61.2%) believe the Affordable Care Act has had an overall negative impact on their organization thus far (45.1% somewhat negative; 16.1% very negative). Less than three in ten (28.9%) describe the ACA’s impact as neutral, while 9.8% state that the overall impact has been positive thus far.

Looking forward, respondents are similarly pessimistic. Three in five respondents (60.5%) anticipate that the ACA will have an overall negative impact on their organization going forward (43.7% somewhat negative;16.8% very negative.) More than one-quarter (28.7%) anticipate a neutral effect, while 10.7% believe the impact will be positive.

Organizations offering health care coverage were asked about their biggest ACA-related challenge. Far and away, respondents most often cited challenges related to reporting and disclosure (52.8%). These reporting and disclosure challenges often include meeting mandated deadlines, collecting additional employee information, understanding forms and identifying which employee groups should be reported. 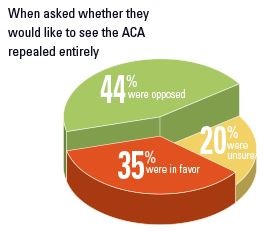 Respondents were also asked whether they want the Affordable Care Act repealed in its entirety. Despite the lack of popularity, just over one in three respondents (35.4%) would like the ACA repealed completely. Four in nine (44.2%) would not support a complete repeal, while one in five respondents were not sure (20.4%).

2016 Employer-Sponsored Health Care: ACA’s Impact is the seventh survey in a series on how corporate health benefit plans are being affected by the Affordable Care Act. Survey responses were received from human resources and benefits professionals representing a wide base of U.S. employers from nearly 20 different industries and ranging in size from fewer than 50 to more than 10,000 employees.