A Law With a Noble Purpose: ADA Turns 25

I have something in common with the Americans with Disabilities Act (ADA). We both entered the employee benefits scene 25 years ago. On July 26, 1990, a few months after I started working at the International Foundation as an assistant librarian, the ADA was signed into law. I was new to the employee benefits world and had lots of concepts, laws, acronyms and jargon to learn.

It was fascinating to be a part of the initial scramble to figure out how the new law affected our members and our industry. As with any new law, there were lots of questions. What processes and policies will plan sponsors have to change? Are the provisions of the statute clear? What is the effective date? Many questions weren’t answered until 1991 with the release of the regulations. Often the nitty-gritty aspects of implementation and enforcement for any law are not known until one or more federal agencies issue regulations. 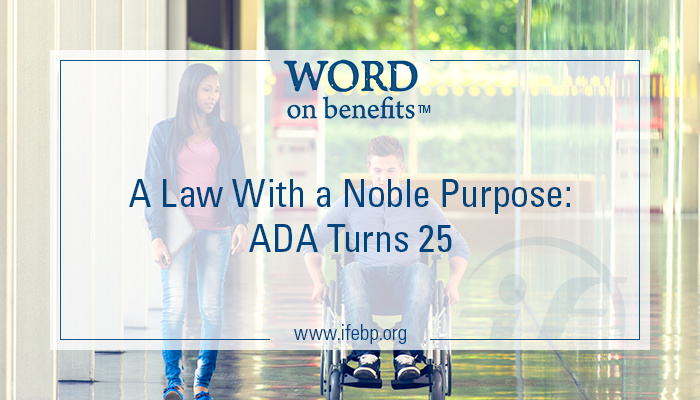 The ADA is a broad-reaching law with a noble purpose. It is designed to make sure people with disabilities have the same rights and opportunities as everyone else. The law prohibits discrimination in all areas of public life, including jobs, schools, transportation, and all public and private places that are open to the general public. A large section of the law focuses on employment and includes provisions related to employee benefits.

Initially, when the law and regulations were released, the benefits emphasis centered on making sure people with disabilities were not singled out and offered lesser benefits than employees without disabilities, especially in the case of health and disability benefits. The ADA also has a significant impact on leaves of absence and addresses the question of when an employer needs to grant a leave of absence as a reasonable accommodation for an ADA-protected disability. The leave landscape got more complicated in 1993 when the Family and Medical Leave Act was enacted, followed by various military leave laws.

As with most U.S. laws, other laws and legal cases also helped define the parameters of ADA. In 2008, in response to Supreme Court decisions that narrowly interpreted the ADA definition of disability, the ADA Amendments Act (ADAAA) was passed. This related law provided broader protections from discrimination.

Like many laws in the employee benefits sphere, ADA is still evolving. That’s one reason I’ve enjoyed working at the International Foundation all these years. It continues to be challenging and compelling to keep up with all the changes affecting our industry and the benefits that are so critical to workers.